Hi! In the process of looking into potential Chessplosion console ports, I have been cleaning up the code and fixing some small issues that I found. It's mostly behind-the-scenes code changes that are invisible to players, with these two exceptions:

An explanation for the analog stick changes: in Chessplosion, holding a diagonal direction on keyboard, dpad or analog stick will cause you to alternate between the two directions you're holding. For example, holding the up-right diagonal will cause you to move one square up, then one square right, then one square up again, and so on. This works great on keyboard and dpad, but on analog stick it can be much too easy to accidentally drift into The Diagonal Zone when you're just trying to walk in a straight line.

The fix to this was to heavily shrink down The Diagonal Zone from 45 degrees to 15 degrees, to make it easier to avoid if you're just trying to move straight up, down, left, or right. The diagram below shows the difference; if you want to move in a straight line on an analog stick, you have to keep your stick within the green area: 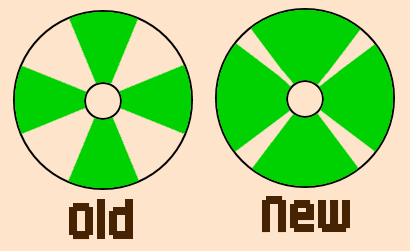 Hope this helps anyone who plays on analog stick, and thank you again for supporting Chessplosion!